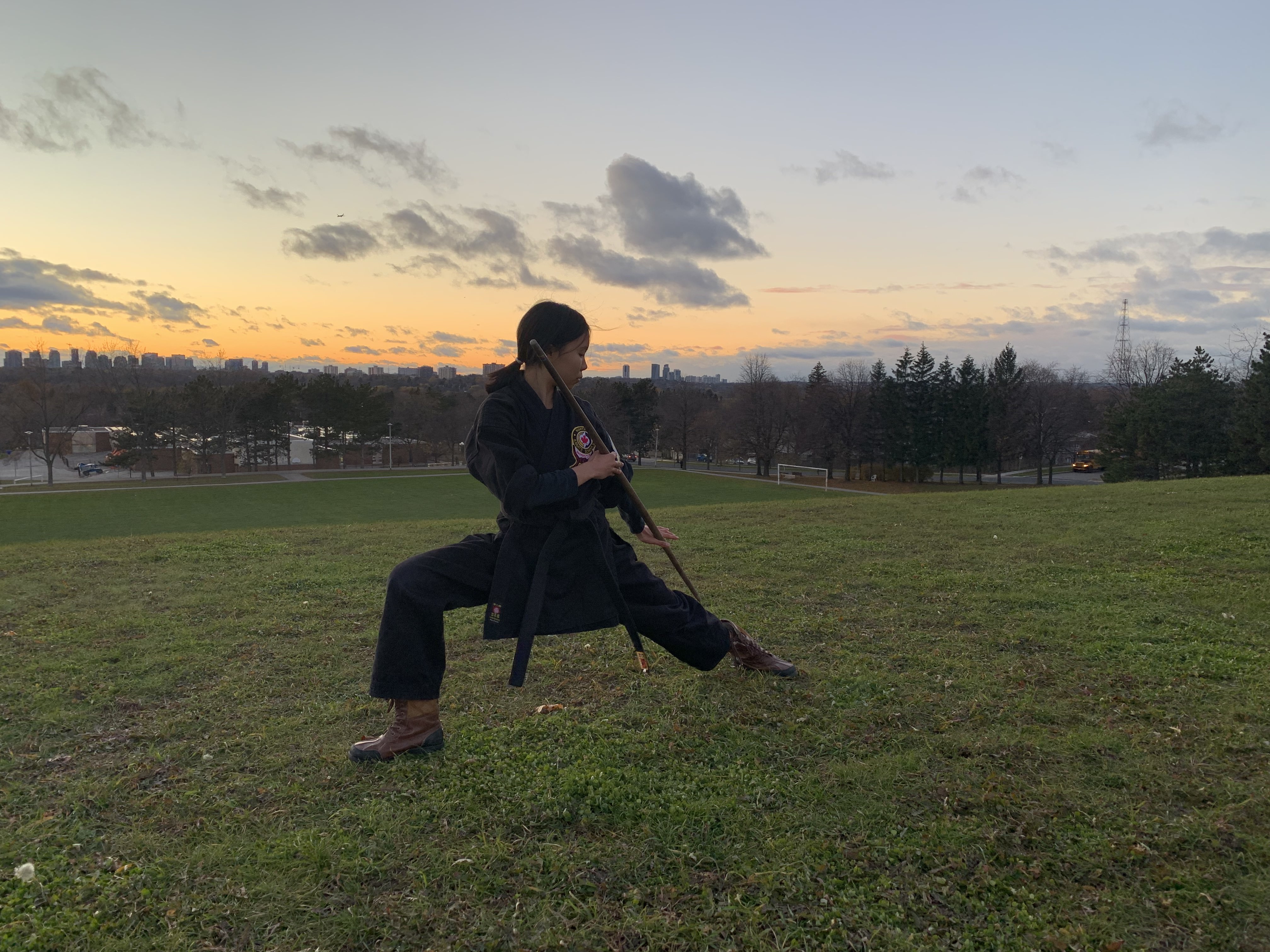 The mats were lined with blue tape. It used to be red, but as I hadn’t returned in person since we closed down, this was my first time taking in the renovations. The paper in my hands meant it to be my last. I stood in the doorway at the bottom of the stairs to the dojo I once described fervently to my mother as my second home. The present class was a clump of black belts. One girl, with whom I used to teach, waved to me giddily. I waved back. I could have been taking this class right now, circling my wrists while catching up with my friends, scraping my knuckles off on the pads, feeling the burn and being ablaze, exhilarated. Funny how you can remember a sensation so vividly even when you can’t quite experience it anymore.

“Misheel?” Shihan. Across the room, he peered at me curiously from over his mask. I waved, and he walked over, straight down to business. Reading my mind, he gestured towards the office. I removed my shoes and followed him in.

There was a familiar room, one that hadn’t changed. How fitting that the place where it all began would be the place where it ended. Only, for the longest time, I didn't anticipate that I would be the one to walk myself out. I had feared being jerked out just as I was jerked in. “My membership ended over a month ago,” I began, “and we’ve decided not to renew it." Shihan was taken aback. He knew as well as I did myself that there was never a time I didn’t give my all in class. People as passionate as me don’t just quit. “Oh... alright I guess we’ll check you out.” Awkward periods of small talk and silence followed. I didn’t try to explain myself, and he didn’t probe for details. I was never the talkative type with authority figures, but Shihan’s silence, or disinterest, unsettled me. So used was I to the intensity, the pressure, and ultimately the hurt; stripes I was neglected and staff training I was excluded from. Now, he was softer than the night he handed me my green belt out of nowhere nearly four years ago, beaming as he said, “You earned it.” Now when he asked, “What are you going to be doing now?” there was a hint of regret.

He didn’t wait for a reply, but just kept talking to himself as he casually signed my community involvement sheet for 90 hours of service. In the meantime, I tried to think of answers for myself. I was going to dedicate myself to yoga and spirituality. I was going to practice piano without rushing to leave for training. I was going to eat dinner and sleep freely without adjusting to class times. I would pursue leadership and responsibilities that now mattered to me more than learning or teaching kata. Silently I wondered if he had ever reckoned I had a life outside the dojo. I was only walking away from one of many things I loved.

Taking a final glance at the weapons on the walls, the coloured belts arranged in rank, I decided the replicas at home, my bo, sais, tonfas, belts striped with black and red, would serve as my souvenirs. Shihan laid his pen down. He reminded me I could restart my program whenever I was ready, tentatively suggested passing by to say bye to Renshi, and, after a pause, “At least you got to get your black belt.”

Less than two minutes later, I had put my shoes back on, walked up the stairs without savouring them for the last time, and returned to the car. Eejee waited for me to say something. My mind was blank at the moment, but for one thought. “It’s done.” “Checkmark,” she offered. The car started, and we exited the parking lot, turning our back to the oh-so-familiar plaza. We drove past the landmarks I used to observe through the corner of my eye, gushing to my dad about how great class had been, what compliments I had received from which Sensei, and a trickle of memories made their way into my spaced-out mind.
They say if you aren't earning or learning from something, it's time to move on, but being exhausted with karate, kata, and drama didn't change the fact that it had taught and shaped me enormously. I had loved it. I still do. It had been my childhood dream to train in martial arts, and even as I walked away from the dojo that had realized my dream, I carried with me all I had learned and earned. I had gained trust in my fists and confidence in my body. Conditioning had shown me how strong I could be. Partner work has taught me the fun in fitness, the compassion in fierceness, and the independence in cooperation. When I couldn't love myself, Renshi and the other Senseis' words had brought me joy and motivation. Shihan’s philosophies still ring in my ears: “perfect practice makes perfect.” And yes, the pressure and the exclusion hurt, but if anything, it raised me from vying for validation to self-discipline for the sake of self-love.
I swallowed, then blurted out the thoughts I had been suppressing. “Looking at the mats and mirrors," I turned to my mom, “I realized I could still do it... but time... and emotional reasons...”
Eejee nodded sympathetically, “When I have trouble letting go of something, I say to myself, maybe I’ll come back to it one day.”
Maybe I will. For now, I might not wear my belt three days a week but at heart, I remain a black belt. As goes our student creed, "I promise to be the best possible person I can be. With honesty in my heart, confidence in my mind, and strength in my body, I will achieve excellence and share it with others."